It was very early the morning of September 11, 2001 when the phone rang and woke me up.

My mom was on the other line and said “Your dad’s work just called, he’s supposed to be in a meeting at the World Trade Center.  There’s been an attack.  They can’t find him and haven’t heard from him.  Turn on the TV.”

I turned on the TV and tried to wrap my brain around what I was seeing.  After we got off the phone, I stood staring at the picture on the screen of the smoking buildings.  I stared into the TV screen thinking “my dad could be in there right now!”  Wondering into the TV whether my dad was alive or dead.

I hadn’t even known my dad was in New York.  He went often enough for work that it wasn’t strange that he was there without me knowing.

My husband and I spent the morning in a daze, watching TV and trying to comprehend what we were seeing.  My son was 15 months at the time, and I remember thinking later that he was so calm that day, not needy, not loud.  Almost like he knew that was necessary of him.

I left a message on my dads cell phone.  My dad never ever has his phone turned on.  So, leaving a message was my only hope of trying to contact him.

My mom and I spoke throughout the morning, she had no new information.  She was kinda scattered, maybe a bit in shock thinking of the possibility of my dad being gone.  I remember talking to her about whether or not she should go to work, and convincing her that she should stay home so my dad could call her.

He had been running a little late for his meeting, as he was walking towards the World Trade Center, which he had been to many times in the past, he saw the second plane flying very low.  He said he had thought it was strange how low the plane was flying, and then, soon after, was being turned around to leave the area.  He said he walked for miles.  It took him days to get home to California.  He met people and together they took buses, and rented cars to get home.

The Friday night following that September 11th, my husband and I with our young son went to our town fair.  I remember them playing ‘Proud to be and American’ by Lee Greenwood.  Tears streamed down my face as well as many others.

The Saturday after my dad got back to California, my dad and mom drove up to see us, and our son.  He talked about the events a lot, but I could tell he was just happy to be hanging out with his grandson, a bit of normal after an unreal week.

We were one of the lucky ones, our family.

I told this story to my 5th grade class that I long term subbed for last year.  They were silent through the whole story.  When I got to the point where my dad called our house, a 5th grade boy grabbed his chest with both hands over his heart, his eyes were huge, and he let out a very long, very loud “ooooohhhhhhhh!!”  He was so genuinely relieved that my dad had been ok.  That grabbed me.  This class can learn about 9/11 in books, but I’d like to think that especially for this one boy, he’ll remember some of the feelings that come with that day.

As we learned of the many stories of September 11th through the following days and weeks, the one that has always stuck with me is Todd Beamer, Flight 93.  Each and every time I have heard the phrase “Let’s Roll” since hearing of him declaring those words, I think of him.  Here was a man, with the most unimaginable task in front of him.  His reaction was let’s get what has to be done, “Let’s roll.”  Amazing.

Later in the afternoon of September 11, 2001, my mom and I were again talking on the phone.  She said she was going to go outside and hang up her American flag.  After we got off the phone, I went and purchased an American flag.  We have had an American flag flying outside of our home ever since.  I’ve had to replace many over these 13 years.  And each time I do, as well as when I stop to notice our flag flying outside our home, I think of how beautiful it it.

It really is beautiful.  Thank you to the heroes of that day. 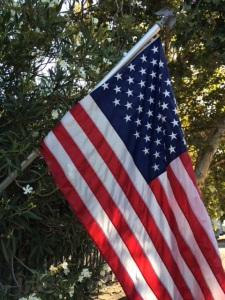