I have googled what good wasps do in the world.  I haven’t come up with anything worthwhile yet.

I do have some things to list on the horrible things that wasps contribute to the world.  Stings.  Really painful stings.  Stings that lead to allergic reactions.  Wasps suck.

My son literally ran across a wasp nest when he was about 8, resulting in multiple stings, and a humongous, worthwhile fear of wasps.

And then, as a family, two years ago we had a wasp incident that was so epic, that my children drew pictures of it, and talked about it for a very long time.

It was a Sunday in August, beautiful, warm day.  We decided to take the kayaks out for a couple hours on a nearby slow river, let the kids swim a bit, just enjoy the day.  2 parents, 3 kids, 2 dogs.  What could go wrong?

We launched at a spot that we hadn’t in the past, crowded, random dogs running without leashes, their owners not caring…this may have set the tone for the rest of the day if I had paid attention.  Thing is, we had our dogs with us too.  On leashes.  This was the first time we were going to take the dogs with us on kayaks.  I pictured all the cute photos I’d seen of dogs calmly sitting on their owners kayaks, smiling as they got to be paddled around.

Not our dogs.  Instantly jumping from the kayaks, nearly capsizing us, wanting to swim along side the boat.  Sigh.  We finally wrangled the two dogs, got them onto separate kayaks, and sat them between our legs to keep them still.  Such a lovely, calm first five minutes of our outing.

About 15 minutes into out peaceful float, everyone was boiling hot (including me with my frustration of this not being at all relaxing so far), we began to look for a nice spot to stop and take a swim.  The right side of the bank was labeled ‘Private Property, do not enter’, so we looked to the left.  A beautiful spot under a big tree, totally shaded with a narrow sandy beach, perfect.  The dogs were thrilled, began exploring the area right away between dips in the water.  My husband was beginning to relax, as was I standing in the cool water.  My oldest stayed in his kayak floating, and my two girls began to get wet in the water.

Then all hell broke loose.

My husband said ‘I just got stung!’  Just then, I had something fly between my sunglasses and my eye, I dropped my glasses into the water, and looked up to see tons of wasps flying around us.  I got stung on my left wrist, screamed and went under the water thinking that would make it get off me.  Nope, those bastards just keep on repeatedly stinging.  By then, I had a second one on my arm, was screaming like a lunatic, and quickly grabbed them and plucked them off of me.  Amongst all this nasty craziness, we as parents, yelled at the kids to get on their kayaks and start moving out quickly.  I remember clearly looking into the center of the water as my son had his littlest sister on the back of his kayak, both of them staring at me crying as they saw me screaming in pain.  Looking back, I wish I could say I held it together.  I didn’t, not at all.  I was scared, and it really hurt badly.    As we began to follow their kayaks in ours, I have to laugh now thinking of the sight we must have been.  One kayak with my son paddling, my littlest sitting on the back, my middle daughter paddling behind them, both dogs swimming behind them, and then our two kayaks bringing up the back.

As I began to calm, and things settled as we were paddling back, my middle daughter said ‘mom, you have one on your back.’  I asked her to paddle up to me and take her paddle and swipe it off.  She did with ninja like precision.  Overall, I got stung 5 times.  My husband, 3.  My kids, none.  So thankful for that none.

We did not talk too much on the way back, just paddled quickly.  I began itching.  Crazy itching on my head, under my arms.  My nose got a little stuffy.

We packed those kayaks up in record time and headed home.

I went straight into the bathroom to look in the mirror once we got into our house.  There were welts up and down my arms, under my arms and spreading onto my shoulders.  I calmly broke the news to my husband that we needed to head to the ER, and my youngest looked at me with tears in her eyes and said ‘are you going to die mom?’  I’m so thankful that I had my right mind with me after initially losing it when I got stung.  I assured her that I would be fine, gave her the needed amount of love to make sure she believed me, brought my kids to my neighbors who were thankfully home and off to the ER we went.

The hives and swelling weren’t the thing that got me seen right away once we got to the overcrowded ER, it was that my nose had gotten stuffed up after being stung.  Lots of drugs through the IV got me back on my feet, and some Benedryl handed to my husband for his sting got us headed back home after many hours.

I think it’s safe to say that I hate Prednisone.  I could probably get side effects from Tylenol if that is possible, so to put my body on Prednisone, that was evil.  Not as evil as being away the next weekend when I got to stop taking it, only to be woken up by what I would assume is most like going through drug withdrawals.  Come to find out, the pacing around the room, and feeling like I was coming out of my skin, or about to have a heart attack was the result of the prescribing doctor not tapering off the Prednisone, rather cutting me off of a high dose cold turkey.  Got a couple of Ativan out of it though, still sitting in my cabinet in case it’s ever needed.  The doctor thought I may need a little edge taken off.

Wasps to me so far =

Wasps suck so much.  And they are everywhere around my house during the summer.

Mike Rowe posted this on his FB page, it is perfect: 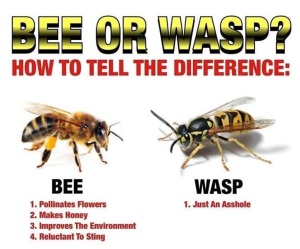