What I refer to as my first migraine happened 11 years ago.  I was in Picture People with my then 3 year old son and less than 1 year old daughter.  Picture People was only for when I had two kids, by the time I had my third, going to the mall to take pictures was no longer a fun idea for a day outing.

As I was paying for my pictures (which had no theme or reason, probably just because I hadn’t gotten them done in the last 2-3 months) I looked at the cashier/photo lady, which was a young girl in her early, early 20’s, and I said “I can’t really see you right now.  I mean, I can kinda see you.  You’re all cut up.  Like I only see bits of you.  I’m not sure what’s going on.”  And this is where you can insert the phrase “Are you high?” that could have come out of her mouth to match the look on her face.

I don’t remember being scared until I reached the car and started driving home after my eyes seemed to come back to me.  By the time I got home, I was in full panic mode.  My husband brought me to the emergency room, along with both kids who we had no one to watch at such a quick drop of the hat.  At the time, I had no idea what a migraine really was, I thought it was a bad headache, and I had claimed to have had one before.  That day there became a new definition for migraine.  One that was scary and in the ER, but was not as scary as the things I had going through my mind when we arrived with my vision all screwed up.  I now know how common ER migraine visits are.  According to Migraine Research Foundation  http://www.migraineresearchfoundation.org/fact-sheet.html ‘every 10 seconds, someone in the United States goes to the emergency room with a headache or migraine.’  I was that person for that 10 seconds.

I laid on the exam table, and cried.  I thought something was so, so wrong.  The doctor asked me a ton of questions, I couldn’t stop crying, not like crazy crying, no ugly cry, just constant tears.  I was scared to death.  When in the end he told me he thought I was having a migraine, I was so surprised, and relieved, and scared, and confused.  I’m a why person.  Why did I have this?  (Notice 11 years later, still no clear answer).  Oh my gosh, is this going to happen again?  When can it happen again?  Why?  (11 years later, that’s where the anxiety began.)

I don’t remember much excitement with migraines, or any regular occurrence after that.  I wanted to find a correlation with altitude and motion since that first one had happened a couple of days after an airplane flight, and the next one that I can remember happened the day after riding the roller coaster at California Adventure in Disneyland.  We were still in Anaheim, going into Medieval Times with a large amount of our family, including five kids 5 and under, one kid under 10.  I remember the parking lot where my vision left, and I still clearly remember the dark of the night as I laid in the car while the rest of my family and extended family were watching knights duel on horses and eating drumsticks and the rest of their dinner without utensils, which was what I wanted to do.  Sucked. 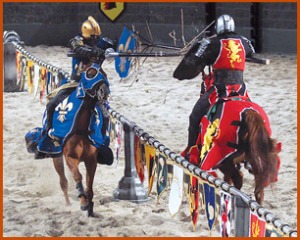 That all seems so long ago.  And the ability to separate migraines so clearly by large amounts of space and time.  Different times.

I mentioned above that the Picture People episode is what I refer to as my first migraine.  When I looked back, I realized that I had experienced what I think was my first migraine the day before my bridal shower.  I was at the end of my 12 week full time internship at a lock down mental health long term care facility.  Amazing experience, I learned so much, but wow, days at work for me were not similar at all to anyone else’s that I knew!  On a Friday of one of my last weeks, I did not feel well.  My dad always warned me of not calling in sick on a Monday or Friday, but by mid day, I knew I had to go home, something was not right.

As I drove my 15 minute drive home, I remember pulling over on the side of the road.  A lady pulled up next to me and asked if I was ok.  My response went something like this, “I can’t see real good right now.  I can’t see you.  I feel dizzy and I’m kinda seeing black spots.”  She asked if she could help, I said “No, I’m fine, I’ll be fine, just can’t see right now.  I’m just going to sit here for a while.”

I made it home, I remember feeling rough the next day at my bridal shower.  But cracking up with my Matron of Honor about that poor lady that pulled over to ask me how I was and to wonder what in the world she thought of me, the laughter made things better!

Fast forward to today.  It’s been 31 days since my last migraine.  Going for that long of a time span between migraines has only happened about twice in the last two years as I look through my ‘migraine notes’.  Again, so much of an improvement than the twice a week that were coming just two months ago.

I have to think something in my daily anti-migraine potion of B-2, Feverfew, Butterbur and my migraine smoothies has to be doing me this favor.   (recipe and specific details listed in my first post here:  https://youcantarguewithcrazy.wordpress.com/2014/09/03/winning-charlie-sheen-reference-of-course-the-endless-game-of-migraines-for-this-quarter-at-least/)

My anti-migraine potion isn’t getting me high, but hopefully with it, I’m not getting as many questionable looks these days!!