Last Tuesday I called two of our four chickens A-Holes.  I’m certain I said the real word, but I’m keeping this family friendly. 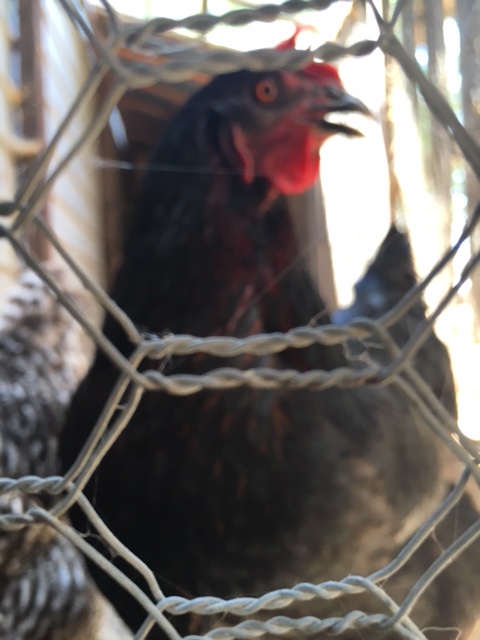 Now, this isn’t normal behavior, me calling my chickens names, so let me explain…

The prior Sunday, I went to let the chickens out of their Taj Mahal chicken coop, and my white one, Foggy (Full name Foghorn, because she’s a Leghorn type chicken.  How could we not name her that?)

Anyhow, when I opened up the coop door, Foghorn, who is white, had blood covering her head and parts of her body.  Scared me to death.  When I tried to clean her up, the only thing I could determine is that I had thought the blood was coming from her comb (the red thing on top of her head.)  I left her in the coop alone because it’s possible that she was picked on by the others and they did the damage.  About an hour later, she was not doing well.  I picked her up and brought her inside of the office and put her in the sink and gave her a cool bath.  I have never given a chicken a bath.  I have no chicken medical experience, but it was over 100 degrees out, and she didn’t seem good.

My husband came home to a pretty much non responsive chicken inside a cat carrier, in our office with the A/C on.  He’s usually pretty grossed out by animals inside, but I think he knew, this being our most friendly and sweet chicken, who “talks” to us each time we talk to her, she needed to be taken care of the best way possible.  I wasn’t sure if she was going to make it.  The only way we described her was to say she was “beak down.”  Couldn’t lift her head, and couldn’t stand.  I gave her water out of my hand repeatedly through that evening.  The next morning, as I was apprehensive to check on her, she was standing, and then eating, and talking to us.  Crazy!  I put her in with our goats so that she wasn’t with the other chickens in case they were the culprits in this whole injury to start with.

There’s the backstory, on to the A-Holes…

On Tuesday, I was rushing to get all animals situated so I could leave for 2 nights to go away with my husband, with no kids.  (Sidenote:  it’s been 8 years since we have been gone without kids for 2 nights.)

As I was rounding up the chickens to put them inside their coop so I could leave, A-Hole #1 began hanging around the goat pen checking out Foggy through the fence posts with WAY too much interest.  So, as I picked her up and carried her to the coop, I told her (out loud) “Stop being an A-Hole, leave Foggy alone.”

When I went to close the chicken coop door, I realized only 2 of the 3 that should be in there were standing there looking at me.

Over this fence in a neighbors yard.

Did I mention I was trying to get on the road to get away for 2 nights?  I was already 1/2 hour later than I had wanted to leave, with no leaving in quick sight.

So, there I was, trying to call this chicken, entice it with treats, everything I could think of, and I reluctantly realized, there was no other option than to hop that damn fence.

When one of the chickens has gotten into this neighbors yard in the past, I have gotten one of the kids to climb the ladder, get over the fence, pick up the chicken, and climb back up the cross boards up and over the fence to put this chicken back on the right side of the fence.  We have no idea how these chickens pull their Houdini moves to get to the other side of the fence, so we don’t know any other way of getting them back.

No kids were here last Tuesday though.  My 45 year old self had to hop the fence, get in the other people’s yard, pick up the chicken, and climb the fence back over.  As I was straddling the top of the fence with the chicken in my arms, one leg on each side of the fence, I told Blackjack (out loud), “You’re an A-Hole.”  Then brought her to the safety of her coop.

This below is the reason why the chickens are no longer free to roam the yard whenever they want and have to be put in the coop sometimes: 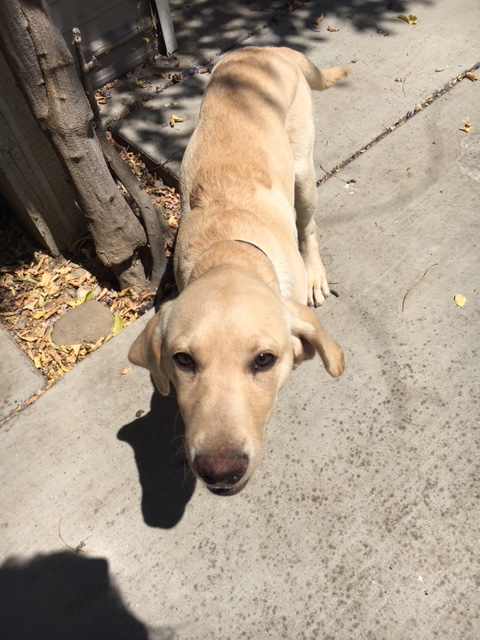 This guy.  Cooper.  Our 4 month old pup.  He’s fond of chasing the chickens and then giving their feathers “kisses,” for lack of a better description.

These two savage beasts that we have could care less about the chickens: 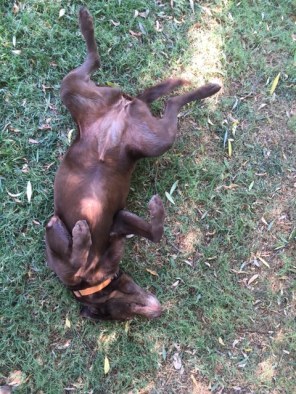 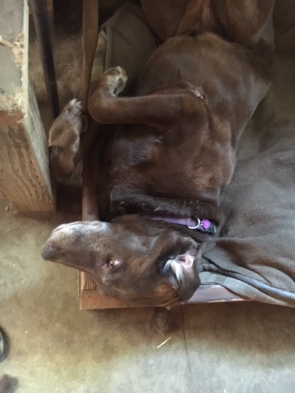 Mara and Zoe, looking as fierce as ever.  You can read more about them here:  For the love of dogs.

Anyhow, happy ending, Foggy is doing great.  Still hanging out with the goats for a while longer while she completely heals.  And the others aren’t acting like A-Holes for now.

And that, my friends, is definitely an example of “other tidbits of my life,” as explained in my blog’s title:

You can’t argue with crazy

Migraines suck, and other tidbits of my life!